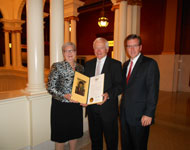 HARRISBURG – State Senator Gene Yaw (R-23), along with his colleagues in the Senate, today recognized Dr. Davie Jane Gilmour of Williamsport upon being named the first woman to chair the Board of Directors for Little League Baseball International.

Founded in 1939, the Board of Directors for Little League Baseball is responsible for directing over 7,000 baseball and softball leagues around the world consisting of over 2.5 million participants.

“The Senate of Pennsylvania today honors Dr. Davie Jane Gilmour upon being named the first female Chair in the 74 year history of Little League,” Yaw said. “Dr. Gilmour and the members of the Little League International Board of Directors are volunteers in this service to Little League and are dedicated to working on behalf of the children of the world. I applaud her commitment and enthusiasm and on behalf of the entire Senate would like to honor and recognize her in this new role.”

Dr. Gilmour, and her husband Fred, have resided in Lycoming County for the past 35 years.