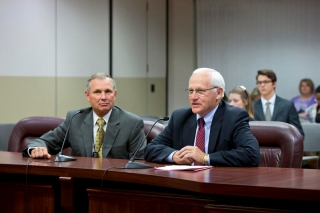 “I have known Jim for many years and I have been very impressed by his involvement and commitment to improving our region,” Yaw said before the committee.  “Jim has been involved in the dairy industry since a young age.  His experience and knowledge are great assets to Pennsylvania’s dairy industry and I am happy to lend my support to him for this position.”

“Jim will be a great asset on the Milk Marketing Board,” added state Senator Elder Vogel, chairman of the committee.  “As a dairy farmer, who is transitioning his operation to the next generation, Jim has the experience necessary to make policy decisions for the future of dairy in Pennsylvania.”

Van Blarcom, a resident of Columbia Cross Roads, was nominated for the position by Governor Tom Corbett in April.  He currently owns and operates a 500 head dairy herd.

The Pennsylvania Milk Marketing Board is an independent agency that establishes minimum milk prices, minimum wholesale prices and minimum retail prices.  The three-member Board is overseen by two farmer members and one consumer member.  If approved by the state Senate, Van Blarcom will replace Richard Kriebel, a Columbia County dairy farmer and former board chairman.