HARRISBURG – State Senator Gene Yaw (R-23) today was recognized by the Pennsylvania Association of County Drug and Alcohol Administrators, an affiliate of the County Commissioners Association of Pennsylvania (CCAP), for his strong support and leadership in combatting substance abuse and drug overdoses across the state.

Yaw, who serves as Chairman of the Board for the Center for Rural Pennsylvania, was instrumental in bringing to light the heroin crisis plaguing Pennsylvania.  Over the course of two months, four statewide public hearings were held by the Center to examine the growing numbers of heroin and opioid related deaths and arrests.

The Center’s final report echoed support for two bills considered and passed by the General Assembly during the 2013-14 legislative session.  Namely, Senate Bill 1164, which provides immunity to an individual who contacts authorities in the event of a drug overdose.  The legislation also makes the anti-overdose drug, Naloxone, more widely available.  Additionally, the report endorsed Senate Bill 1180, which expands the types of drugs monitored under the newly-created Prescription Drug Monitoring Program.

“While I am deeply honored by this recognition from the Pennsylvania Association of County Drug and Alcohol Administrators, the accomplishments achieved in Pennsylvania pale in comparison to the work that lies ahead,” Yaw stated. “Although the Center’s focus was specifically on heroin use in rural Pennsylvania, we know addiction has no municipal, county, or state boundaries.  It is, across the board, a statewide and national epidemic impacting residents of every age, race, gender and socioeconomic background.  Simply locking people behind bars is not the answer.  We, as a state, must do more.”

“Opioids and heroin have taken over as the number one drug of choice,” said George Vogel, Executive Director of the Council on Chemical Abuse, who presented Yaw with the award.  “Senator Yaw’s meetings throughout Pennsylvania helped stimulate passage of life saving bills, such as the Naloxone bill.  It’s saving lives.”

The Pennsylvania Association of County Drug and Alcohol Administrators (PACDAA) is a professional association that represents the Single County Authorities (SCAs) across the commonwealth who receive state and federal dollars through contracts with the Department of Drug and Alcohol Programs (DDAP), to plan, coordinate, programmatically and fiscally manage and implement the delivery of drug and alcohol prevention, intervention, and treatment services at the local level. 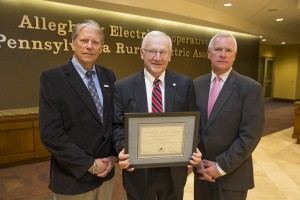