HARRISBURG – On May 1st, “A Conversation with Senator Gene Yaw” takes a behind-the-scenes tour of the Pennsylvania Department of Treasury, Bureau of Unclaimed Property, in Harrisburg.

“Throughout Bradford, Lycoming, Sullivan, Susquehanna and Union counties, there is over $15 million dollars for claim by eligible area residents,” Yaw said.  “This month’s program will discuss how the Department of Treasury can help you recover that property free of charge.  One out of every 10 state residents have property waiting for them,” Yaw added.

This month’s television report will air on:

A ‘Conversation with Senator Gene Yaw’ is intended to keep residents of the 23rd Senatorial District informed about state and local issues and to showcase the people, places and communities that make this region so unique. 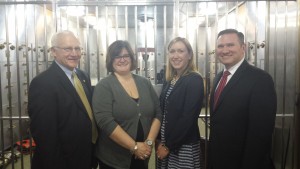