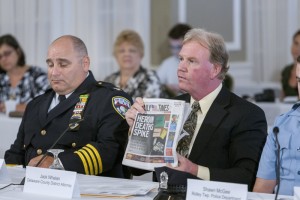 The 11-member Center for Rural Pennsylvania Board of Directors, area legislators, state officials, law enforcement officials and state and local treatment service providers participated in the five-hour-long hearing at the Yorktowne Hotel in York County.

“The heroin epidemic has reached epidemic proportions, and has taken center stage on the local, state and national levels,” said Sen. Gene Yaw (R-23), Chairman of the Center’s Board of Directors. “The Center for Rural Pennsylvania is leading the way to educate policymakers, inform the public, and enhance current policies in Pennsylvania related to heroin and opioid addiction treatment. To date, the Center has received over 30 hours of verbal testimony and 350 pages of written testimony from 90 presenters. The Center has certainly taken a leadership role in this fight.”

“Through these (Center) hearings, we are increasing the awareness of the complexity of the heroin epidemic in every aspect and for every individual living in the Commonwealth,” said Dr. Nancy Falvo, Center board secretary.  “As a nurse and an educator, I am thrilled to be a part of these hearings.”

Tuesday’s hearing fell on the heels of a White House announcement on a new initiative to pair public health and law enforcement in an effort to shift the emphasis from punishment to addiction treatment. Ironically, at the same time, the federal Food and Drug Administration (FDA) approved the use of OxyContin for children as young as 11 years old with severe pain.

Recent reports indicate that approximately 80 percent of heroin addicts traced their addiction back to prescription opioids. A Centers for Disease Control and Prevention Vital Signs report also confirmed that health care providers wrote 259 million prescriptions for painkillers in 2012, enough for every adult in the United States to have a bottle of prescription painkillers. Further, in 2011, the National Institutes on Drug Abuse (NIDA) estimated that 4.2 million Americans age 12 or older had used heroin at least once in their lives.

In Pennsylvania, the number of fatal heroin overdoses has been steadily increasing. According to a 2014 report from the Pennsylvania State Coroners Association, there were 45 reported heroin deaths in 2009 and 124 reported heroin deaths by mid-2013. Other states across the nation are reporting an increase in heroin use as addicts are shifting from more costly prescription opioids to cheaper alternatives.

“This second round of public hearings reaffirmed that the rise in heroin and opioid abuse has no geographic boundaries, and crosses all socioeconomic groups, all ages and all races,” Yaw added.  “Those affected could be someone’s brother, sister, child, parent or grandparent.  No one is immune from this disease.”

The Center for Rural Pennsylvania is scheduled to release the findings from the most recent hearings to the General Assembly in the fall.