Located at 500 Market Street in the Borough of Mifflinburg, the neo-Georgian building was built in 1925 as the Herr family’s private residence, and later willed to the Mifflinburg community to serve as a public library since 1944.

With construction expected to begin this fall, the new addition will feature an all-purpose community room, renovated basement space for teenagers, an elevator for easy access to all levels, and a new handicapped entrance.  Other enhanced features will include a café, expanded adult area and additional computers.

“The groundbreaking celebrates a new chapter in the history of the building,” Yaw said. “This expansion represents a tremendous opportunity to engage more residents and meet the needs of the Mifflinburg community in the 21st century.  I commend all of those who are making this project become a reality.”

Earlier this year, the Library kicked off its “Library for Life” $700,000 Capital Campaign, which has since received a $150,000 Community Development Block Grant and a $250,000 Keystone Recreation, Park and Conservation Fund library facilities grant, as well as significant financial support from area donors. 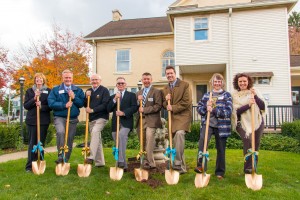