The award recognizes an outstanding Pennsylvania legislator for their work and support of rural health initiatives that address an identified need in their district or across the state.

Yaw was recognized for the substantial contribution he has made to rural health in Pennsylvania in his role as the Chairman of the Center for Rural Pennsylvania.  As chairman, he organized and hosted a series of public hearings (July-August 2014, 2015) on the heroin epidemic facing Pennsylvania.

The public hearings, as well as the report released by the Center for Rural Pennsylvania entitled Heroin: Combating this Growing Epidemic in Pennsylvania, have been a milestone in generating awareness and support to combat the growing epidemic.

“I was shocked and very surprised, it was something I never expected,” Yaw said.  “When we started off with the heroin hearings a year ago, the goal was to raise the awareness of the heroin problem in rural Pennsylvania, but we’ve now gotten to the point where it’s a much bigger problem statewide.  As a result of the hearings, The Center for Rural Pennsylvania has released the most definitive report that’s been done on the heroin problem in the state.  The fact that the work of the Center has led to this award is very rewarding to me.”

Yaw has held the position of Chairman of the Center for Rural Pennsylvania for almost 5 years. He has consistently shown his leadership in ensuring that the Center’s research and data analysis is relevant and timely not only to state government, but to organizations and residents throughout rural Pennsylvania. Under his chairmanship, the Center has undertaken research work looking at the impacts of Marcellus Shale gas exploration in rural Pennsylvania, a six-year longitudinal study; a five-year project interviewing waves of rural school students on their educational, career and residential aspirations; and the updating of Pennsylvania’s Transfer of Wealth report that looks at the wealth in all 67 counties, projecting timeframes for when that wealth will be transferred to the next generation, and strategies for community and private foundations to garner some of that wealth for community-based projects. 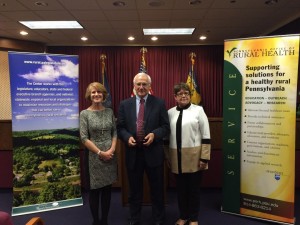