HARRISBURG – A Union County family received recognition for their family farm on Friday during the 100th Pennsylvania Farm Show in Harrisburg, according to state Senator Gene Yaw (R-23).

The Frock-Boyer farm owned by Gary E. Boyer and his daughter and son-in-law Faith and Ty Brininger, Mifflinburg, has been designated a Pennsylvania “Bicentennial Farm” by the Pennsylvania Department of Agriculture.  The farm, established on July 29th, 1802, was originally purchased for $10.59 per acre.  Fifty-seven of the original acres are still in use.

“Today, we are honored by your work and commitment to agriculture,” Senator Yaw said to the family.  “It is your strong work ethic that connects us to our past and preserves it for future generations.  It is certainly an extraordinary accomplishment.”

During the ceremony, the family received a sign to identify the property as having historic status, which was presented by Secretary of Agriculture Russell Redding.

“The kind of commitment to the land and agricultural heritage of Pennsylvania demonstrated by these farmers helps explain the success of Pennsylvania’s farmland preservation program,” Secretary Redding said.  Pennsylvania leads the United States in the number of acres preserved for agricultural use in perpetuity.

“As we celebrate these farm families who have passed their land, their values, and their love of farming down from generation to generation over the last 100, even 200 years, we confidently look forward to agriculture’s continued prominence in our economy and our communities.” Redding added.

Congratulatory citations were also presented by Senator Yaw and Representative Fred Keller (R-85) who was also in attendance.

Union County is home to 31 “Century” and five “Bicentennial” farms.

For more information about the awards, visit www.agriculture.pa.gov and search “Century Farm” or “Bicentennial Farm” or call 717-705-7796. 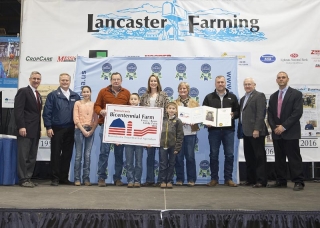