HARRISBURG – The Special Committee on Senate Address has issued recommendations to the full Senate on whether the chamber should proceed to vote on the removal of Attorney General Kathleen Kane due to the suspension of her law license, according to Senator Gene Yaw (R-23), a member of the seven-member Committee.

“After listening to over eight hours of testimony and examining a number of documents presented to the Committee, my conclusion is there is sufficient grounds to present this matter to the full Senate,” Yaw said.  “Throughout these three months, it was clear to me that the legal standing and operation of the chief law enforcement office of the state are detrimentally impacted when the head of the office does not hold a valid license to practice law.”

The Special Committee on Senate Address has been charged with determining whether Kathleen Kane can fulfill the legal duties of the office with an indefinitely suspended law license.  It first conducted three public hearings to determine whether there was sufficient evidence to proceed with due notice to the Attorney General and a full hearing as required by the Constitution for removal of a civil officer.

The three hearings featured credible witnesses that led the Special Committee to determine that due notice and a full hearing should be provided to Kathleen Kane.  The Attorney General chose not to appear at any time before the Committee.

“The Special Committee has fulfilled its charge and has gathered a tremendous amount of testimony for the Senate to consider,” said Senator Yaw.  “It is my opinion that there is sufficient evidence that Kathleen Kane cannot perform the duties of Attorney General with a suspended law license.  Now each and every senator will have an opportunity to review this material and vote on the issue at hand.”

Yaw added that, “this procedure has been a unique experience of historical significance for Pennsylvania.”

A complete history of the Committee’s work, including all votes, reports, testimony and hearing videos may be found at www.senatorgeneyaw.com. 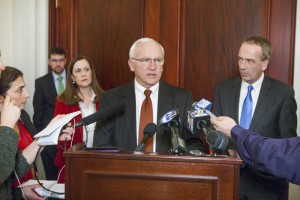 Sen. Yaw discusses the Special Committee report with members of the media today at the State Capitol Building.