HARRISBURG – State Senator Gene Yaw (R-23), and members of the Senate today recognized former Lycoming College Football Coach Frank Girardi on the onset of his induction into the College Football Hall of Fame.

“It is with great pride that the Senate of Pennsylvania honors those citizens who strive tirelessly toward achievements in their competitive endeavors,” Yaw noted.  “Frank Girardi is more than a coach, but a role model who has mentored thousands of young athletes.  It is my honor to present Coach Girardi with this richly deserved recognition and extend my congratulations on his induction into the College Football Hall of Fame.”

Girardi will be officially inducted into the College Football Hall of Fame at New York City’s Waldorf-Astoria in a black-tie event on Tuesday, Dec. 6. He will also be recognized with the National Hall of Fame salute during the Chick-fil-A Peach Bowl, one of the two College Football Playoff games, in Atlanta’s Georgia Dome on Saturday, Dec. 31.

Girardi coached the Lycoming football team for 36 years (1972-2007) and concluded his career as one of the most successful coaches in NCAA history. He compiled an overall record of 257-97-4 (.723), ranking him 16th in all divisions in victories. Girardi is one of only 29 coaches to record 200 or more victories at one school. He guided the program to two national championship appearances in 1990 and 1997. He led the Warriors to 13 Middle Atlantic Conference titles, including seven during the 1990s, and 11 NCAA playoff berths. He was named the MAC Coach of the Year on 12 occasions and recorded 29 consecutive winning seasons from 1975-2003. 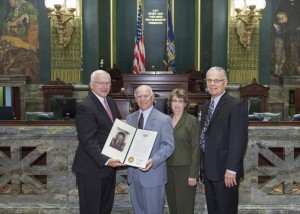