WILLIAMSPORT – As part of an ongoing effort to improve transportation and safety in and around the area, Rep. Jeff C. Wheeland (R-83) and Sen. Gene Yaw (R-23) announced a grant of $777,395 for the Old City/East Third Street Gateway project.

The project would connect Lycoming College to Old City, Trade and Transit Centre I and II, and businesses located on Via Bella.

“There have been a lot of exciting improvements being made in Williamsport, and this grant will go a long way toward encouraging private investment and help address traffic problems that have hindered economic development,” said Wheeland. “The connection between Lycoming College and the businesses community will be a great step in the entire reshaping of the area.”

“I’m pleased that the Commonwealth Financing Authority approved needed funding to help move the Old City, East Third Street Gateway Redevelopment project forward,” Sen. Yaw said. “This transportation project will not only be important to our regional economy and the safety of motorists, bicyclists and pedestrians, but also improve the entrance to Lycoming College from the south.  This project will be a real boost to the City.”

The project is designed to improve traffic flow, bicycle and pedestrian safety and to connect Williamsport revitalization projects. The plan includes pathway and streetscape improvements for East Third, Basin and Franklin streets; and pedestrian connections at Russell Inn Heritage Park and Willow Street.

The grant comes from the Commonwealth Financing Authority under the Multimodal Transportation Fund (MTF).

The total cost of the project is about $2.5 million.

The MTF is used for projects that help transportation center improvements, safety, coordination of transit services, streetscape, lighting and sidewalk improvements and others. 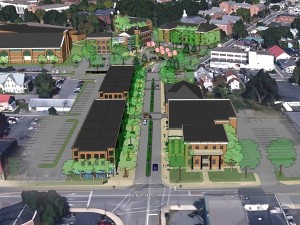 This graphic illustration shows the Old City/East Third Street Gateway Redevelopment project. It is a partnership involving the City of Williamsport, River Valley Transportation and Lycoming College to revitalize the eastern corridor of the Central Business District known as “Old City.”