“I am pleased to appoint Senator Yaw to continue to serve as Chairman of the Senate Environmental Resources and Energy Committee for the 2017-2018 Legislative Session,” Senator Scarnati said.  “I am confident that in this role he will continue to provide the Committee with strong leadership and be a champion for advancing important environmental protection measures.”

The Senate Environmental Resources and Energy Committee focuses on bills, policies and issues dealing with energy resources and development, including regulations and conservation; public lands and their renewable resources; surface mining, coal, oil, and gas, and mineral leasing; air and water resources.

“I thank Senator Scarnati for entrusting me again with this important responsibility,” Sen. Yaw said, who has served as Committee Chairman since 2013.  “During this new legislative session, we will continue working to strengthen our laws and regulations to further protect Pennsylvania’s rivers, forests and streams for future generations.  This effort will include promoting policy initiatives in the areas of nutrient reduction, fisheries management, toxics remediation, pollution prevention, habitat restoration and land management.

We will continue promoting the sustainable and safe use of our natural resources, in order to reduce our dependence on foreign energy sources.  This past session we took major steps to expand our energy infrastructure locally to under-served and un-served rural areas of the state; however, a great challenge still exists with the lack of pipeline infrastructure that connects Pennsylvania’s Marcellus production with that of other national and world markets.

Additionally, through our Committee work, we have the opportunity to implement and support programs that use our diverse portfolio of energy sources, which will continue Pennsylvania’s vital role of providing electricity throughout the Northeast.

This session, the Committee will also evaluate changes to the Covered Device Recycling Act to make safe, responsible and affordable recycling of electronic devices more accessible across Pennsylvania, and again discuss legislation seeking to expand the rights of landowners who are currently leased with natural gas companies.  Over two consecutive sessions, the Senate Environmental Resources and Energy Committee approved measures aimed at leveling the playing field in favor of Pennsylvania landowners who are looking for fair treatment when leasing their land.  Unfortunately, those efforts approved by the Senate later stalled in the House of Representatives.

I look forward to working with my colleagues during the new legislative session to address these important issues.”

Senator Yaw will also continue to serve as one of 21 members of the Chesapeake Bay Commission, and as Chairman of the Board for the Center for Rural Pennsylvania, a bipartisan, bicameral legislative research agency of the General Assembly. 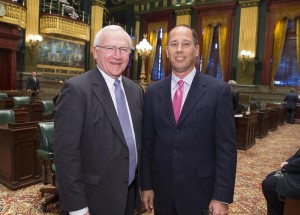