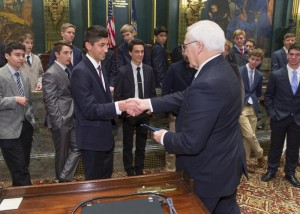 “It is so encouraging to see what these young men have accomplished,” Sen. Yaw said. “They showed us all that persistence and hard-work pays off and I’m very excited to see what the future holds for those who will remain on this team, as well as for those moving on to play at the collegiate level.”  “It is my honor to recognize and welcome all of these exceptional athletes and coaches who are here representing Lewisburg High School to the state Capitol.”

In addition to its second consecutive title, the Green Dragon’s also received its second straight Academic Award from the National Soccer Coaches Association of America (NSCAA). In order to be recognized, the squad must accumulate a 3.25 GPA or better.