Pennsylvania’s current Good Samaritan Law, Act 139 of 2014, provides immunity to an individual for minor drug possession offenses when he or she seeks emergency medical assistance for a drug overdose.  The law is meant to encourage people to quickly report overdoses to emergency personnel without fearing legal repercussions.  Under the law, individuals experiencing an overdose are also immune from prosecution.

Since 2014, law enforcement and emergency responders have expressed concern that they have repeatedly responded to the same location four or more times to witness the same individual experiencing a drug overdose, and who has ultimately refused treatment once revived with Naloxone.

Under Sen. Yaw’s bill, Senate Bill 654, an overdose victim will be required to obtain treatment within 30 days after receiving emergency medical assistance in order to qualify for immunity or face jail time.

“After listening to many first responders, I believe that we can no longer give individuals suffering from an opioid or other drug-related overdose a free pass, only to have them overdose a second or subsequent time and risk dying,” Yaw said.  “It is vitally important that we get them into treatment as quickly as possible.  If they refuse treatment this time, they can face imminent jail time.  My legislation does not eliminate the immunity provision for those people who call 9-1-1 to report an overdose.”

“Any individual revived by Narcan should be required to complete mandatory counseling or at least be responsible for the cost of the Narcan,” said James W. Laughlin, Penn Township Police Department, York County.  “At no time should an individual be permitted to sign off and not seek medical attention after being on the “verge of death.”  This mandatory counseling could be the push some individuals need to get on the road to recovery and be responsible for one’s actions.”

“The goal of this legislation is not only to save lives, but to get those people suffering from addiction, opioid use or misuse, into treatment,” Yaw added. 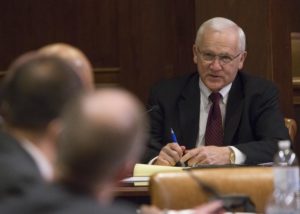