HARRISBURG – This month, “A Conversation with Senator Gene Yaw (R-23)” sits down with award-winning author and journalist Sam Quinones during his visit to Williamsport where he discusses his book, “Dreamland: The True Tale of America’s Opiate Epidemic.”

The discussion offers an in-depth look at the causes of the public health issue that has been recognized as a crisis at the local, state and national levels.

His stories center around the fall and rise of Portsmouth, Ohio, as the backdrop to weave together two riveting tales of capitalism run amok: the unfettered prescription of addictive pain medications during the 1990’s and the influx of black tar heroin.

“Sam’s book has become a little bit of a roadmap for me as we hold public hearings across the state on the heroin and opioid epidemic,” Sen. Yaw said. “Addiction is a life-long problem that will undoubtedly take a community-wide effort to address.”

This program is the first in a two-part series. 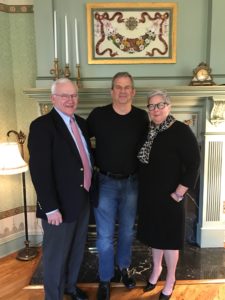