Senate Bill 655 makes mandatory the current voluntary guidelines developed by the Task Force on the proper and safe prescribing of opioid-related pain medications.

These guidelines encourage the judicious prescribing of opioid pain medications in nine areas including: treating chronic noncancer pain, emergency department treatment, dental practices, opioid dispensing by pharmacists, obstetrics and gynecology pain treatment, geriatric pain treatment, treating pregnant mothers with opioid use disorders, safe prescribing benzodiazepines for acute treatment of anxiety and insomnia, as well as prescribing in orthopedics and sports medicine.  The guidelines also call for other clinical interventions prior to the initiation of opioids.

“The amount of opioids prescribed and sold in the U.S. quadrupled since 1999, yet there has not been an overall change in the amount of pain that Americans report according to studies,” Sen. Yaw noted.  “While prescription opioids can be an appropriate part of pain management, the voluntary guidelines established by the Governor’s Task Force aim to improve the safety of prescribing and reduce the harms associated with opioids, including opioid use disorder and overdose.  I do not believe that mandatory implementation of these guidelines impose excessive barriers that will interfere with treatment. They put safeguards in place to prevent some unintended consequences.  Unsafe prescribing must stop.”

“The guidelines aren’t going to fix Pennsylvania’s drug abuse epidemic single-handedly, but it is a step forward,” Yaw added.

The bill now moves to the full Senate for consideration. 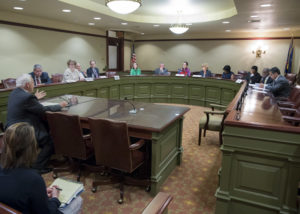