HARRISBURG – State Sen. Gene Yaw (R-23) joined area veterans, their families and state officials Wednesday in Harrisburg for the opening ceremony of The Wall That Heals, a 375-foot-long replica of the Vietnam Veterans Memorial located in Washington, D.C.

The Wall That Heals bears the names of the more than 58,000 service members who perished or went missing during the Vietnam War.

The traveling memorial arrived Wednesday morning for a four-day display at the state Capitol Complex.

“It’s very humbling when you look at it,” said Sen. Yaw, who enlisted in the United States Army in 1964 and served during the Vietnam War.  “It really provides an opportunity to educate, show our patriotism and pay our respects to those who sacrificed so much.”

The Wall That Heals exhibition was hosted by the Pennsylvania General Assembly and also featured a mobile Education Center.  The Center provides information on the Vietnam Veterans Memorial in Washington, including a display of the type of items left at the Washington, D.C. exhibit, a digital kiosk that helps visitors search for names, and a custom Harley-Davidson “Gold Star Bike” donated by the Vietnam Veterans Memorial Fund, that pays tribute to mothers who lost sons in the war.

Former Pennsylvania Governor Tom Ridge provided the Keynote Address during the event.  Ridge, who was also a former Congressman and the first U.S. Secretary of Homeland Security, served as an Army staff sergeant, and received the Bronze Star for Valor for his service in Vietnam.

The Wall That Heals will remain open to the public free of charge 24 hours a day until 2 p.m. Sunday, May 13th. From Harrisburg, it will leave for Salem, Indiana. 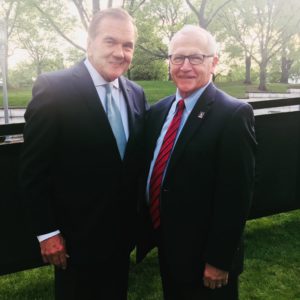 Sen. Gene Yaw joins former Pennsylvania Governor and Homeland Security Secretary Tom Ridge prior to his Keynote Address at the Wall That Heals in Harrisburg. 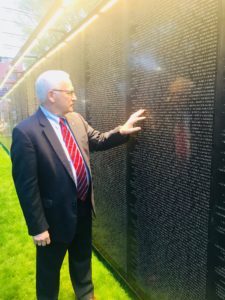 Sen. Gene Yaw reflects at the Wall That Heals, a half-scale replica of the Vietnam Veterans Memorial in Washington, D.C. designed to travel to communities throughout the United States.