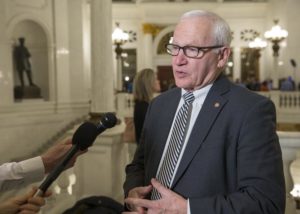 HARRISBURG – The state Senate today approved a fiscally responsible budget for Fiscal Year 2018-2019 that holds the line on spending, increases funding for education and school safety initiatives, and includes no new taxes, according to Senator Gene Yaw (R-23).

“After several years of embracing conservative budgeting and rejecting Governor Wolf’s spending hikes, today we find ourselves on stronger financial footing than in any year in recent memory,” Sen. Yaw said.   “That turnaround is a testament to the principles that have guided us through all of the recent years’ budgets – limited spending and avoiding tax increases.”

Yaw added that the final spending total of $32.7 billion remains below the rate of inflation, and well within the limits prescribed in the Taxpayer Bill of Rights. It also allocates money to the state’s Rainy Day fund for the first time in more than a decade.

The budget makes a historic investment in school safety with more than $60 million in new funding for school resource officers, security equipment and other proven methods of preventing school violence.

“While the funding is critical, we are fully aware that additional money won’t solve the problem alone – we need to look at programs and resources that school districts can use to keep our kids safe,” Sen. Yaw said.  “A number of measures have already been introduced, and our School Safety Task Force is still developing additional initiatives.  We will use the summer to hold hearings, gather public feedback and work on a final product.”

A significant part of the additional spending is devoted to education. The budget increases funding for Basic Education by $100 million, Pre-K Counts and Head Start by $25 million, and Special Education by $15 million.  Educational Improvement Tax Credits will also see a $25 million increase.

Higher education is a priority in the budget. State System of Higher Education funding will increase by 3.3 percent, and funding for state-related universities will increase by 3 percent. Community colleges will also see a 3-percent boost in funding.

Additional funding is also included for the Pennsylvania State Police to train three new cadet classes, which will result in nearly 300 additional troopers.

Other highlights include additional funding for:

The budget also recognizes the importance of three industries that have historically been among Pennsylvania’s most critical sectors of the economy: agriculture, manufacturing and tourism, restoring funding that the Governor’s original budget plan cut.

The budget plan now moves to the Governor for his signature.