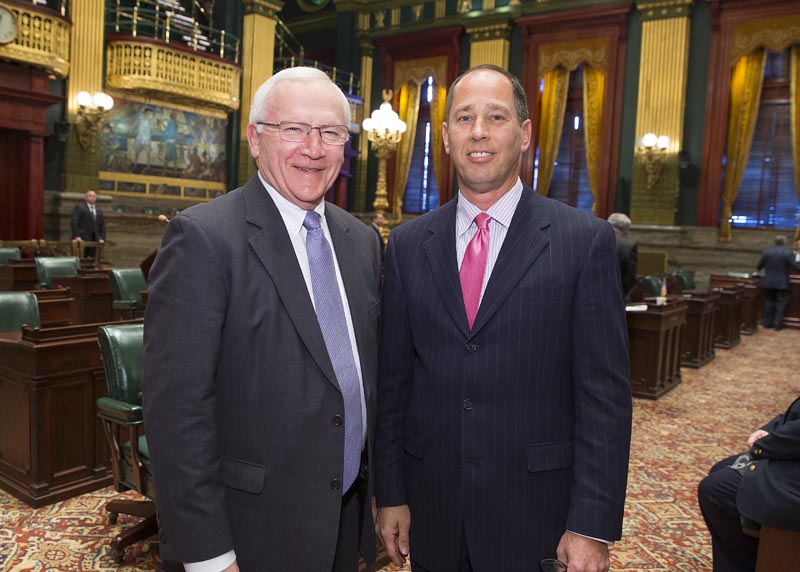 State Sen. Gene Yaw (left) was reappointed by Senate President Pro Tempore Joe Scarnati on Monday to serve as Chairman of the Senate Environmental Resources and Energy Committee for the 2019-2020 Legislative Session.

The Committee has broad jurisdiction over the state’s energy resources and development, including regulations and conservation efforts; public lands and their renewable resources; surface mining, coal, oil, and gas, and mineral leasing; air and water resources.

“I thank Sen. Scarnati for his trust to lead this important committee in the new Session,” said Sen. Yaw.  “I look forward to working with my fellow Senators to advance bipartisan solutions to strengthen our laws and regulations to further protect Pennsylvania’s streams, rivers and forest land for future generations.”

“I am pleased to appoint Senator Yaw to continue to serve as Chairman of the Senate Environmental Resources and Energy Committee for the 2019-2020 Legislative Session,” Senator Scarnati said.  “I am confident that in this role he will continue to provide the Committee with strong leadership and be a champion for advancing important environmental protection measures.”

During the 2017-2018 Legislative Session, Senator Yaw prime-sponsored a package of bills allowing natural gas royalty interest owners the opportunity to inspect records of gas companies to verify proper payment, as well as prohibiting a natural gas company from retaliating against a royalty interest owner by terminating the lease agreement or ceasing development because a landowner questions the accuracy of the royalty payments.  Further, Sen. Yaw championed legislation, Senate Bill 144, through the Environmental Committee amending the Pennsylvania Sewage Facilities Act to provide for the use of alternate on-lot sewage systems for a new land development.  Governor Wolf signed the bill into law as Act 26.

In addition to Sen. Yaw’s role as committee chairman, he also continues to serve as one of 21 members of the tri-state Chesapeake Bay Commission, and as Chairman of the Board for the Center for Rural Pennsylvania, a bipartisan, bicameral legislative research agency of the General Assembly.