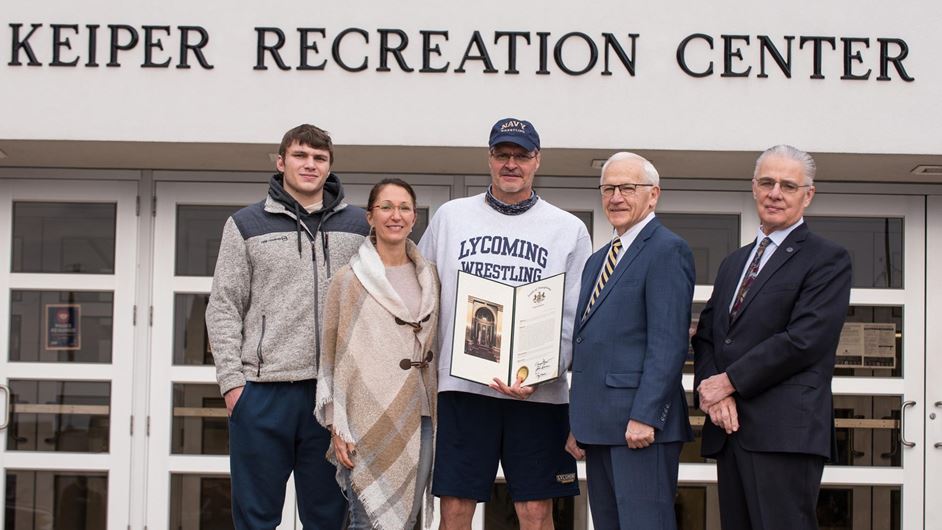 In a small ceremony held in front of Lycoming College’s Keiper Recreation center, Yaw read from the citation that was presented in the senate on Nov. 9. In part, it said, “Approaching each day’s work with the highest of professional standards, Mr. Crebs teaches the principles of sportsmanship and fair play with skill and dedication, virtues he readily and genuinely displays. Through his unwavering dedication to, expertise in and enthusiasm for athletics, he truly stands as a role model worthy of emulation.”

Crebs accepted the citation with Lycoming College President Kent Trachte by his side. His son, Gable, a sophomore on the wrestling team at Lycoming, and wife, Tara ’94, were also in attendance.

Crebs has picked up 419 dual meet wins during his time at Lycoming, a total that is the most among active Division III coaches, 23rd in collegiate wrestling history and eighth-most in Division III history. He has coached 52 conference champions, 30 All-Americans, five national champions and all eight of the school’s 100-match winners.

“Roger Crebs‘ record places him in an elite group of four legendary coaches in the history of Lycoming College Athletics,” Lycoming College President Kent Trachte said. “He teaches lessons on the mat that become the foundation for successful careers after graduation, and under his tutelage, young men learn that it takes hard work, discipline, and determination to reach one’s potential. Lycoming College has been fortunate to have Roger leading our wrestling program for more than a quarter century. I congratulate him on this well-deserved honor.”

Throughout his tenure, Crebs has maintained a high level of excellence, with his teams compiling winning percentages of less than .600 just six times in 27 years as coach, while only one team in his first 27 years as a coach finished under .500.

A three-time MAC champion at Lycoming College from 1984-86, Crebs has never forgotten the legacy of his coach, Budd Whitehill, as he has hosted the Budd Whitehill National Duals every year since 1995, bringing in many of the top D-III teams in the nation each year to compete in one of the toughest tournaments in the country. The Warriors have won the event twice.

A Montoursville resident, Crebs has two sons, Gable, named for legendary wrestler Dan Gable, and Cael, named for another wrestling legend, Cael Sanderson. Cael is a first-year wrestler at the U.S. Naval Academy.