Since 1986, Pik Rite has introduced companies around the globe to their award-winning, client-inspired vegetable harvesting equipment, manure spreaders, commercial waste handling tanks and dump truck bodies.  Employing the latest technologies and adapting to the most current needs, Pik Rite’s engineers design specialized machinery that is perfectly suited to promise affordability, efficiency and endurance.

“This local business, based right here in North Central Pennsylvania, is making an impact around the world,” Senator Yaw said.  I was honored to meet many of the hardworking, dedicated employees during my recent visit to Pik Rite.  The quality of their work is second to none, which is why I’m extremely proud to showcase this local company for my most recent television program.” 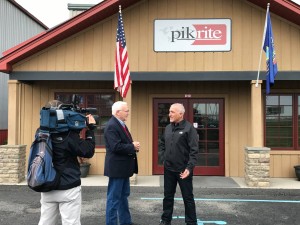